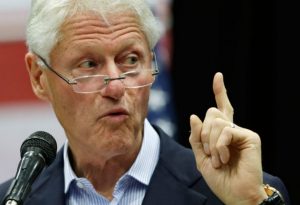 By now, we’re all very familiar with the sexual escapades of Bill Clinton while he was in the Whitehouse.  Of course, he and those who voted for him are responsible for the thousands of human lives lost under his presidency through the abortions that occurred during his time. However, unlike the hated Barak Obama, Mr. Clinton was actually able to compromise and get things down so the United States could operate and grow.

Few talk about the root cause of Bill’s very public sexual activity.  There were multiple cover ups of the various woman he had relations with during his time in office of Governor of Arkansas as well as his time as president.  What was going on?  Of course, we can assume it is just him being too sexually driven.  However, where there is smoke there is fire.  Many people see marriage infidelity as all the man’s fault, however the woman has a role to play in the marriage as well.  Women have their monthly menstrual cycles just as men have a cycle of sexual desire for their wife.  If that desire is not fulfilled men will go looking for sexual fulfillment elsewhere.

This is exactly what has happened to Bill Clinton.  He married a dog whose only goal is to control people and make money.  When you look at Mr. Clinton’s wife, it makes it a bit easier to understand why he looks elsewhere for sexual fulfillment.  Who knows, the last time the Clinton’s had sexual intimacy could have been the conception of Chelsea.  How long ago was that?