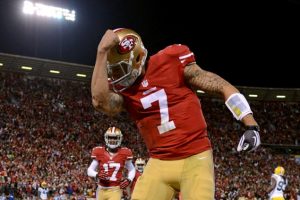 The United States is far from a perfect country.  There has been much injustice.   However, Abraham Lincoln and the Republicans risked national unity and fought a civil war to bring freedom to African American slaves brought to the early American soil against there will.  Women have gotten the right to vote.  Things are not perfect but there is injustice happening in every group but NOT in America as a whole.

When second string American football player Colin Kaepernick says he refuses to stand for The Pledge of Alligence to honor the people who have died to bring the freedom we have, it’s obvious we’re dealing with a man clueless on American history.  All Colin is really doing is creating a distraction for his performance.

Just a brief look at the comment section of any news site, you can see comments of people telling Mr. Colin Kaepernick that it’s time to get out of the NFL.  Strangely enough, the freedom that allows Kaepernick to sit on his bum will the rest of the team and crowd is standing gives him the freedom to espouse his ignorance.  Maybe the best question to ask is “Colin, please name 5 areas were you see the nation promoting racial tension?”  Someday, we hope Colin will become a bright citizen.