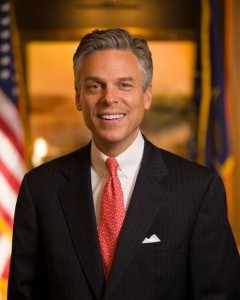 (BrightCitizen.com)  Jon Huntsman Withdraws From The US GOP Presidential Race, but does it really matter?  He decided to endorse Mitt Romney as the most electable to beat Barak Obama on the democratic party side.  Is anyone surprised?

Why was Jon Huntsman even running for President?  Was it really to win, or was it for some other reason?  Clearly he was never a serious contender to anyone but the left-wing media outlets.  He didn’t seriously campaign in Iowa but focused on New Hampshire.  A bit strange strategy for anyone following politics.  Why did he run? Being the son a rich industrialist in Utah, Huntsman has no money issues personally.  Some of the reasons why Huntsman may have run is to-

With time, we’ll get a better idea of why Jon Huntsman even bothered to run for President.  He never really had a chance.  Besides that, we’ll never forget his nerdy answer to what he would take to the Whitehouse if he were elected President.  While other candidates were talking about their wives, Jon Huntsman replied, “I would take my Harley Davidson”.