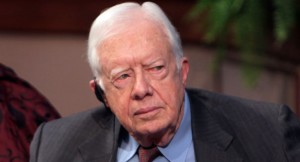 (BrightCitizen.com)  Clearly many people see Jimmy Carter as America’s worst president.  That is reflected in his polling numbers as president and failure to get re-elected.  Despite his poor performance as a whole, he was a frequent critic of US President George Bush II and has constantly been vocally expressing his opinion on the media stage.

Now Carter is involved in Egyptian politics as you can see in a video here.  Do we really need former US president’s involved in the politics of other countries?  Is this what former are President’s supposed to do?

It is noble to want to help other countries, but as his positions don’t seem to reflect the feelings of the American people in general, we wonder when we will be free of this former President.