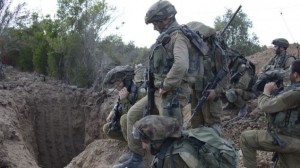 (BrightCitizen.com) It all started with the kidnapping, killing and beheading of three Israeli youth. The Hamas terrorist organisation was likely responsible. That horrific act was followed by the killing of an Arab (Palestinian) murder at the hands of some Israeli murderers. The difference? The Israeli murderers were arrested and arraigned for trial. The Hamas killers were glorified as doing something noble. When Palestinian Arabs say, Israel is besieging Gaza, who do they think they are deceiving? This all started with the murder of three men.

Following the Israeli killing of the Arab, Hamas, the ruling group of the Gaza area, began firing rockets at Israel. Israel responded by taking down threatening rockets with it’s Iron Dome anti-missile system. To date, over 2,000 rockets have been fired at Israel.

Israel moved in early on and threaten to take over the Gaza area if the launching of rockets threatening Israeli citizens did not cease. The Israeli Prime Minister described it as,
“Israel uses our missiles to defend our citizens, Hamas uses their people to defend their rockets”.
Egypt’s government has stepped in several times to institute a cease-fire. Hamas rejected their cease-fire every time or just outright violated it.

How do we bring peace to Gaza? How do we remove the threat to the state of Israel? Short and sweet, demilitarise the Gaza strip and get leadership in power that doesn’t exist just to try to destroy Israel. Israel has blockaded and managed Gaza to limit the inflow of weapons. However, despite that, Hamas used the building materials that were allowed in to make attack tunnels and smuggle weapons in that they could breach Israel’s borders.

It’s time to demilitarise Gaza and not allow terrorists to destroy the area and it’s people due to their blind desires to destroy a nation.

2 Replies to “Do The Arabs In The British Defined Area Of Palestine Think The World Is Blind?”