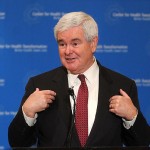 (Bright Citizen.com)  With little financing and many challenges the presidential campaign of Newt Gingrich was less than an underdog.  However, with this year’s intensive debate schedule voters have had the opportunity to become very familiar with the candidates.  Fox News reports

The new polls continue to show Cain and former Massachusetts Gov. Mitt Romney at the top. But Gingrich has carved out a space right alongside them.

A McClatchy-Marist poll showed Romney leading with 23 percent, and Gingrich close behind with 19 percent. Cain was trailing slightly with 17 percent.

A CBS News poll also released Friday showed Cain leading with 18 percent — Romney and Gingrich were close behind with 15 percent each.

Republican front-runner Mitt Romney has a new challenge to contend with as presidential candidates brace for another debate on Saturday — the rise of Newt Gingrich.

The former speaker of the House of Representatives is gaining in the polls and may represent conservatives’ last best hope in 2012 in their search for an alternative to the more moderate Romney, now that Herman Cain and Rick Perry are struggling.

Clearly, people are not comfortable with Mitt Romney as many view him as condescending and haughty in the debates as well as being a flip-flopper on the issues that matter.

At BrightCitizen.com, we are excited to see a candidate arise of substance.  We want to see a president in the United States who is seasoned, honorable, and able to make decisions based on a solid understanding of history.  Now 68 years old, the former Speaker of the House, Mr. Gingrich admits he is less than perfect as he confessed that he asked and received God’s forgiveness for how he divorced his ailing wife years ago.  His debate performances and personal efforts to focus candidates of dethroning Barak Obama over attacking each other have shown what seems to be proving to be a perfect strategy.