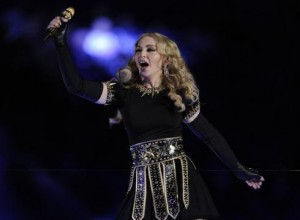 Madonna Ciccone AKA 1990s pop star Madonna performed for the 2012 Superbowl Half-time show.  For a fifty something, she looked good but her age showed despite her well-known effort to remain physically fit.  In the Halftime show we noticed a few things.

Conclusion, probably time for Ms. Ciccone to start turning down those requests to perform in front of such a large and diverse audience.

It would seem that Lady Gaga may have taken her crown for provocative and music and video on fluttering on the edge of immoral.