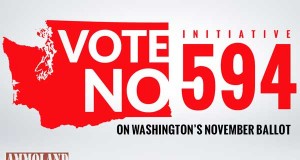 I am writing you about an important initiative in Washington state that comes up for a vote next month, I-594. I am sure that you have seen or heard the ads on TV and radio recently. Initiative 594 would extend to sales between individuals, the background checks that are already required from a gun store.

I’ve got to say, if it stopped there, I might vote for it myself. While I am not convinced that background checks would lower the incidence of crime involving firearms, maybe it would make a slight difference…..maybe it would keep a gun out of the hands of an individual intent on committing crimes with it, at least for a little while. As a competitive shooter and a responsible gun owner, I too don’t want bad guys to have guns. Unfortunately, after reading the initiative, the ACTUAL initiative, I feel it is poorly written at best, and more importantly, it criminalizes behavior of otherwise law abiding citizen gun owners like myself. Here is what I mean:

Not only does I-594 require background checks for gun sales but it applies to “transfers” too. I-594 goes on to define the word “transfer” here: ” (25) “Transfer” means the intended delivery of a firearm to another person without consideration of payment or promise of payment including, but not limited to, gifts and loans.” Despite the fact that the word “Transfer” has been defined in a very vague way before in the RCW’s, the writers of I-594 take it upon themselves to redefine the word for the purposes of their initiative in an even more vague way. The text of the initiative goes on to name a few exceptions to the situations where a background check is required. Unfortunately, the exceptions are very limited like transferring a gun to a friend at an approved shooting range for them to try out, or allowing someone else to borrow a gun while hunting, while you are both in the field hunting.

Here are just some examples of common things that I have done that would be illegal under Initiative 594 without background checks.
1)      Loaning a gun to a friend for the afternoon so that he could test it out at the range.
2)      Handing a cased gun to someone else while I climb down from my truck
3)      Shooting someone else’s gun in the mountains outside of an “approved” range
4)      Allowing a friend to handle my gun at my home because he is interested in buying the model of gun in question.

In the above cases, each time a gun literally changes hands without an accompanying background check, would be a crime. The first “transfer” is a gross misdemeanor, the second “transfer” is a class C felony. That’s right folks, handing a gun to a friend would be a misdemeanor for both of us, his handing it back is a class c felony for both of us. Incidentally, being convicted of a class C felony puts us both on the “prohibited persons” list and we can never buy or own a firearm again. Do the above actions seem to you like they should be criminal offenses? I think not.

What would a felony on my record mean to me besides jail time and loss of my second amendment rights? It would also be the end of my career. That’s right, handing my gun to a friend so he can “check it out” and his handing it back to me, would be that big of a deal.

All of the above to be legal under the initiative is for the two parties to go to a local gun store and have the transferee go through a criminal background check…..this check can take up to 10 days. To “transfer” the gun back to the owner would require another background check. The going rate for the NICS background check processing at a gun store is currently $30-$60 each time.

Here is the point of all of this. I was surprised when I compared what is being said in the ads promoting I-594 and the voters pamphlet vs. what the entire initiative ACTUALLY says. After reading it, I will definitely be voting NO on I-594.

Most of you are not gun owners, I get that. But please keep this in mind when you go and vote in November. I am not the problem. I am not a criminal. Please don’t treat me and others like me as such.

Don’t get me wrong, I think we DO need to do something to help stop gun violence in our country, to stop all violence……. I just don’t think that making criminals out of the common man is the way to do it.