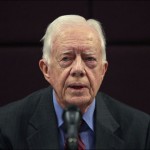 (BrightCitizen.com) Jimmy Carter, America’s most divisive president prior to Barak Obama, has said to British leaders in the UK that he would support Donald Trump over Senator Ted Cruz.  In a speech to the British House of Lords in London, Jimmy gave his take on the candidates.

Although, this was not an endorsement, it does seem to say that if that Donald Trump is closer to a Democrat than a Republican politically.  Read more from CBS news here.

As many pundits have commented, an endorsement by one considered to be America’s worst president, could be the kiss of death.