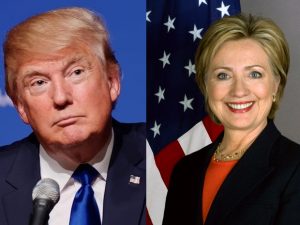 This is the best we’ve got?  Hillary versus Donald Trump?  It’s the boring battle between the pathological liar and the super exaggerator.  Some Americans have have described the choice as almost like choosing between two STDs… would you like Syphilis or Gonorrhea?

Let’s face it, most of us don’t like either choices.  However, if we have to choose between the two we should likely think more about it as we’re dealing with friends… this “friend” were going to have to listen to for the next 4 years unfortunately.

Everyone has one of those friends that things that they are God’s gift to the world.  That person who thinks more of themselves than they ought.  That is definitely the Donald Trump.  On the other hand, no one likes to associate with a person who is always changing their story otherwise known as lying.

Second only to Barak Obama, Hillary Clinton is the dirtiest politician to be in and run again for office.  She arranges political favors for people who pay her foundation, compromises national intelligence for her ‘convenience’ and will lie right to your face… even if it’s about her fellow countrymen dying (in Benghazi).

The Philippines used to be known for corruption, payoffs and cheating politicians. Now we’ve got that same element here in the US with Hillary Clinton.  Now with the new president of the Philippines, Mr. Rodrigo Duterte, the lying cheating criminal element is being called out.  If the country has moral leadership, the country will flourish.

If we have to choose between Hillary and Donald, the choice is clearly Donald.  Frankly, we’d prefer to have another choice of a strong constitutionalist.  He’s certainly a big talker and has a set of problems of his own, however the thought of a sleazy woman who lies about anything and everything being in control of what was once a mostly moral and upright nation is appalling.