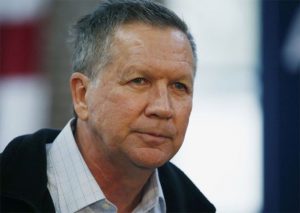 Ohio Governor John Kasich vetoed a Republican party bill limit the murder of innocent babies.  The bill would have limited the ability to kill a child in the womb when the heartbeat is detected.

There is no line between when a baby becomes a human.  By standing against the work to protect the children, Kasich has the blood of this innocent kids on his hands.  US media reported,

In vetoing the bill, Kasich pointed to judicial precedent, saying the legislation was “clearly contrary to the Supreme Court of the United States’ current rulings on abortion.”

Kasich campaigned for the Republican nomination for the US presidency in the 2016 elections but failed to gain interest from the citizens.  He eventually dropped out of the race, as he tried to present himself as a solid Republican with core party ideals, but clearly Kasich is a RINO (Republican In Name Only).